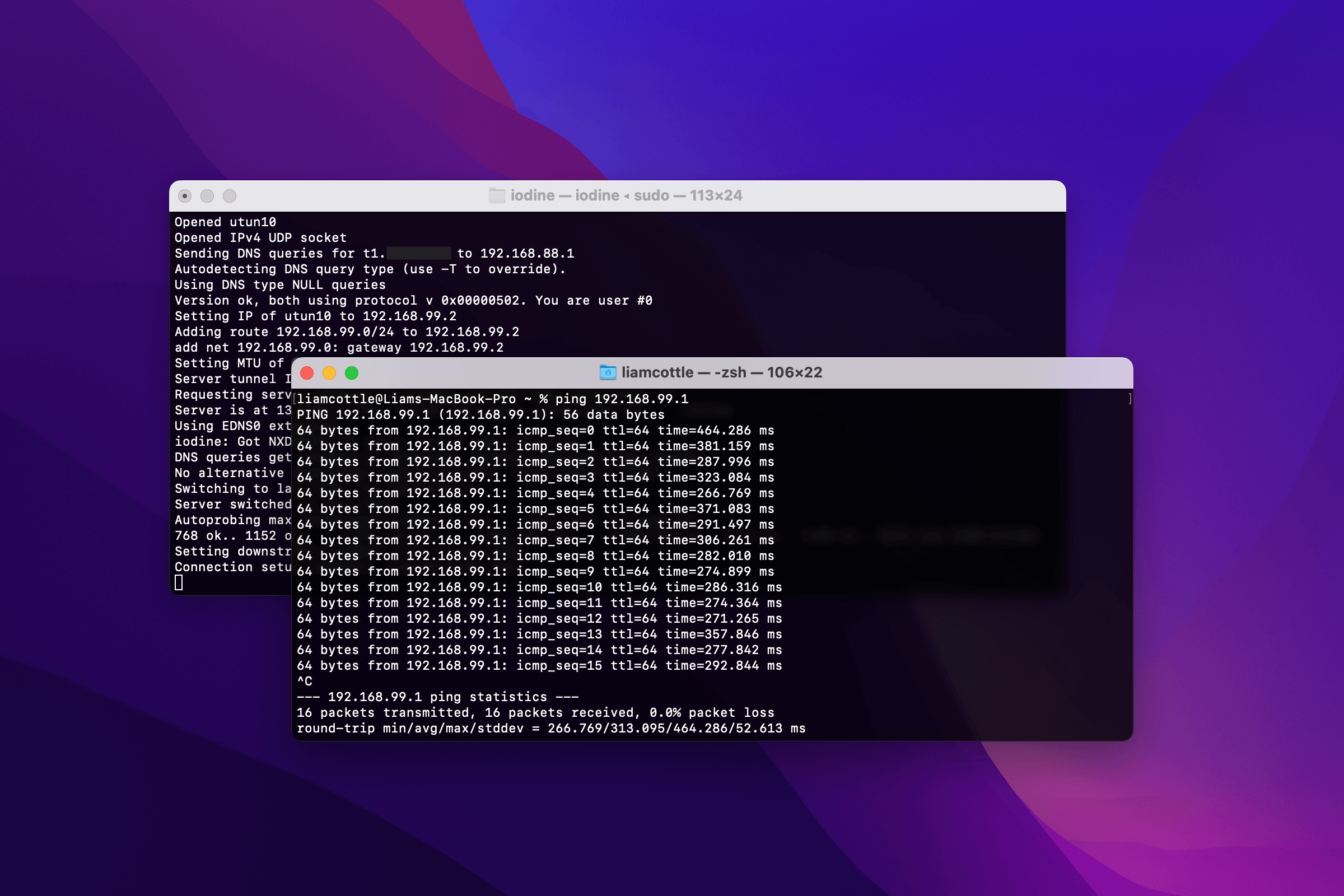 This blog post explains how I connected to the internet through a 4G/LTE sim card that has no credit or data allowance by setting up a socks5 proxy on a remote server and creating a DNS tunnel between my local device and that remote server.

Who knows, you might be in a scenario where you have a 4G connection, and have no credit or data allowance, and just really want to check out my latest tweets.

If your connection allows you to make DNS queries for arbitrary domain names without needing to have credit on your account, you can use a DNS tunnel to access any other server on the internet.

I want to let you know upfront, before you try this, that it will be extremely slow. You’re not going to see gigabit network speeds, let alone megabit speeds. You’ll probably only see a few kilobytes per second, at best. Either way, this network connection could be useful in some situations.

Iodine creates a network tunnel by acting as a domain name server.

When your local device sends a DNS request for a domain name, it will be sent to your carriers’ DNS server, which will then look up the name server associated with the domain being queried.

Your carriers’ DNS server will then query that name server and return the result. This is known as a recursive DNS server.

We will configure the name server for our domain to be our Iodine server. This will make the carriers’ DNS server query our remote server when we ask it for DNS records.

By using Iodine as our custom domain name server;

Iodine will create a network and assign an IP address to your local device and remote server. Packets sent between these IP addresses will travel through the DNS tunnel.

To set this up, you will need a few things;

Once you have registered a domain name, you will need to configure a couple of DNS records. These are the subdomain records that Iodine will communicate through.

If you registered the domain mydnstunnel.com, configure the following DNS records;

Before proceeding further, you should check that your 4G/LTE connection is able to fetch the DNS records you just configured. Try with your carrier DNS server, probably used by default, otherwise try through Cloudflare or Google’s DNS servers to see if your carrier allows access to arbitrary DNS servers.

If you are able to see the public IP address that you configured for your domain, then Iodine should work for you.

If you can’t see the DNS records for your custom domain, your carrier might block DNS traffic when you don’t have any credit or data allowance. In this case, Iodine will likely not work for you at all. But feel free to continue and see if it does anyway.

We need a remote server to run the Iodine Domain Name Server, and also a socks5 proxy. I’m going to use an Ubuntu 22.04 server with Dante as the socks5 proxy.

Add the below config to /etc/danted.conf.

After saving the dante config, restart the service.

Next we need to download and build Iodine on the remote server.

Now that iodined is installed on the remote server, you can run it with the following command;

This is what the flags do;

You’ll want to run Iodine in the background to keep it running when you disconnect from the remote server, but while testing you can use the -f flag to run in the foreground. Ctrl+C will stop the Iodine server.

The next step is to connect your local device to your carrier network through your 4G/LTE modem (or whatever device you chose to use).

Then download and build Iodine for your local device. I am using macOS, and didn’t need to install any dependencies, but your setup might be different.

Now that you have Iodine on your local device, try to establish a DNS tunnel to the remote server.

If all goes well, you should now have a DNS tunnel running. Try pinging the remote server through the tunnel.

Then, try pinging your local device from the remote server.

Note: Your local and remote device IPs might be different. Check the output after running Iodine for the correct IP addresses.

Now you have a DNS tunnel established to your remote server. You could use curl to make http requests through the socks5 proxy via the command line, or you could configure your local device to use the socks5 server as a global proxy so all traffic goes through it.

If you’re having trouble pinging the remote server from the local device when the connection is established, make sure any intermediate DNS servers aren’t caching the query results.

For example, in my setup I have MikroTik RouterOS as the main DNS server. You should configure this to have a low TTL for DNS caching, or change your local device DNS servers to your carrier DNS servers to remove the extra DNS server.